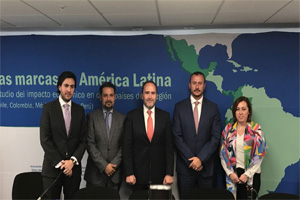 On December 15, 2016 in Mexico City, ASIPI and INTA officially presented the “Trademark Impact Study”. The event had two stages, first a press conference held at the Secretariat of Economy, which was attended by Miguel Ángel Margain, General Director of the Mexican Institute of Intellectual Property (IMPI), who gave the opening remarks and presented the study. The same conference, was also attended by Enrique Diaz, Treasurer of ASIPI and Gerardo Muñoz de Cote of INTA.

The national press showed great interest in the data presented within the analyzed sectors of the Mexican economy. Questions emerged effortlessly in the dynamic encounter.

A Roundtable held at the Sheraton Hotel was the second stage of the event. Alfredo Rendón, Deputy General Manager of IMPI, was present at the meeting, as well as Enrique Díaz and Gerardo Muñoz de Cote. Representatives of the High Courts, Chambers of Commerce and public sector officials attended the meeting, where the attendees were very receptive to the results of the study.

ASIPI and INTA are currently working to continue the dissemination of the study, and to extend it to other industries that have not yet been studied.