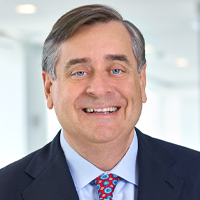 Miguel Zaldivar is Venezuelan by birth, of Cuban parents.

In the 90s he migrated to the United States, where he returned to study law and joined the Steel Hector & Davis firm as Head of the Latin American Practice Area.

In 2002 Miguel join the firm Hogan & Hartson Firm, where he also created the Latin American Practice.

In 2010, Hogan & Hartson joined Lovells, being a merger between a North American company and an English one, creating Hogan Lovells, and that is when Miguel was appointed Head of the Infrastructure and Projects Area, which he had to take until 2018, when he is appointed Member of the Executive Committee of the Firm and Administrator of the Asia Pacific and Middle East Offices.

In 2020, he was appointed CEO of Hogan Lovells, being the first Hispanic to occupy such an important position within the first 50 Firms in the United States.

He is a professor of “Development and Financing of Infrastructure Projects in Latin America” at the University of Miami School of Law. He was a professor of law at the Andrés Bello Catholic University and visiting professor at the Institute of Higher Studies in Administration “IESA” of Venezuela, between 1990 – 1996.

Miguel has commented on Latin American legal matters in different national and international media, including CNN En Español and Oppenheimer Presenta, which are broadcast throughout the American continent. Miguel is in the 2006 edition of The Best Lawyers of America, which publishes an annual list of the best attorneys in the United States and the Miami-Dade Daily Business Review awarded him the 2005 award for “Most Effective Lawyer of the Year” in recognition of his work on mergers and acquisitions in Latin America

All sessions by Miguel Zaldivar

Master Conference: The State of the Legal Industry