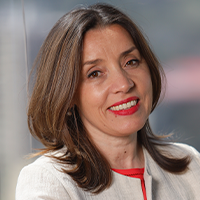 Loreto Bresky took up office as the Director General of the National Institute of Industrial Property of Chile (INAPI) on 24 June 2019.

Loreto is a lawyer, graduated from Universidad de Chile and she holds a diploma in Capital Market an other in Compliance. She has a vast experience in matters related to trademarks, advertising law, unfair competition, free competition and license agreements, and litigation before antitrust agencies.

Between 2008 and 2018 she worked at Alessandri Abogados where she became partner. Previously, she served as director of the Intellectual Property Department at Albagli Zaliasnik Law firm (1998- 2008).

She played an active role in the Chilean Intellectual Property Association (ACHIPI), acting as its Director from 2004 until June 2019. In addition, she has been a consultant of the Chile Mujeres Foundation and a member of the Women Committee of the Chilean Bar Association where she has also act as Judge of Ethics.

All sessions by Loreto Bresky