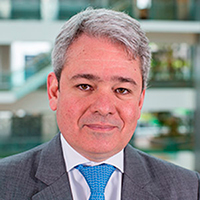 Marco M. Alemán, studied law at the Javeriana University (J.D., 1991) where he obtained a Corporate Law Certificate (L.L.M., 1996). He then obtained a Diploma in Advanced Studies (DEA) in Research at the Alcala University (Spain, 2006), and a Ph.D. in Law (2011, Cum Laude).Mr. Alemán practiced as an IP Attorney from 1991 to 1995. He was then appointed Head of the Colombian Industrial Property Office, from 1995 to 1998, and was invited as a Fellow Visiting Researcher at the Max Planck Institute in Munich, Germany in 1998. He joined the World Intellectual Property Organization (WIPO) in Geneva, Switzerland, in 1999 as Senior Program Officer, Office of Cooperation for Development for Latin America and the Caribbean (from 1999 to 2006). He was then appointed Deputy Director in the Division for Public Policy and Development (from 2006 to 2009) and went on to be Director of the Patent Law Division. He is currently Assistant Director General, IP and Innovation Ecosystems Sector at WIPO.Mr. Alemán is the author of The Andean Legal Framework on Trademarks (Bogota, 1994) and co-author of several books, the most recent ones being: Studies in Homage to Mariano Uzcátegui Urdaneta (Caracas, 2011), Bilateral Trade Agreements and Intellectual Property (Heidelberg, 2014) and Intellectual Property Study in contemporary issues (Mexico, 2015).

All sessions by Marco Matías Alemán