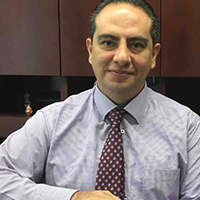 Legal Director of Janssen Cilag of México, a Johnson & Johnson company. Doctor of Law from the National Autonomous University of Mexico (1997). He studied specialties in European Community Law (1999), and Private International Law (2001) at the University of Salamanca, Spain. Later he studied at the same University of Salamanca, within the PhD program Law, Economics and Society in the European Union (2004). In the academic field, he is a professor in the Faculty of Law of the UNAM in the Professional and Graduate Studies Divisions. At the same time, he serves as a doctorate and master’s tutor in the Graduate Studies Division of the Faculty.