The Andean Community protects the Country Brand: a legal contribution from Latin America to the world

In the framework of the celebration of the 50th anniversary of ASIPI in Mexico City, the first step was taken to promote an international regime for the protection of the Country Brand. Indeed, after the exhaustive investigation and analysis that was carried out with the assistance of all the delegates of our association, on December 3, 2014 the conclusions of said investigation were presented.

The study highlighted that the Country Brand or Country Sign did not fit into any of the legal categories of intellectual property since it is not a conventional trademark, nor is it a collective or certification mark. Likewise, it was highlighted that their protection cannot be provided effectively through trade slogans, geographical indications, copyrights or unfair competition. Finally, it was pointed out that it did not fit within the State emblems, nor the official control signs.

Consequently, it was pointed out that it is a distinctive sign sui generis that, due to its nature and purpose, must have a special protection regime at the international level. This is due to the fact that the Country Sign constitutes a kind of umbrella for a country’s competitive strategy and whose objective, among others, is to provide a positive image of the countries that have adopted it, in addition to undeniably contributing to the promotion of exports, investments and tourism.

Based on the preliminary finding and taking into consideration the Positive Agenda for Integration promoted by the Court of Justice of the Andean Community; ASIPI worked tirelessly to make its findings known in Latin America. To do this, it continued with the analysis and disseminated conclusions throughout the region. Subsequently and throughout these years, it has actively collaborated with the Republic of Peru to support its proposal for the issue to be debated within the World Intellectual Property Organization. The purpose of this proposal is to analyze the possibility of signing an International Treaty on the matter.

To date, the placing on the agenda of this issue has had an important result: the recent adoption of Decision 876 of the Commission of the Cartagena Agreement, through which a Common Regime on Country Branding is established. This standard is a great example of how countries can move forward together.
ASIPI is deeply pleased to have actively collaborated with the consolidation of the Country Brand in the Andean Community, in addition to collaborating with the countries that comprise it in introducing this issue on the international intellectual property agenda. In this regard, it unreservedly congratulates the Andean Countries for having adopted a pioneering norm that, clearly, constitutes a milestone in international law. In the same way, it renews its commitment to continue supporting the consolidation of the figure.

As an Association we also wish to make a special recognition to our national delegates for their continuous contribution in the investigation of this figure in their respective countries and to the members of the ASIPI Country Sign Commission made up of Luis Diez Canseco Nuñez, Octavio Espinosa, Jorge Chávarro and Juli Gutierrez Zanelli. 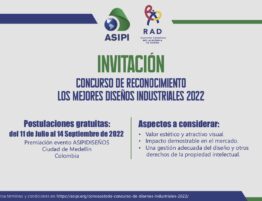