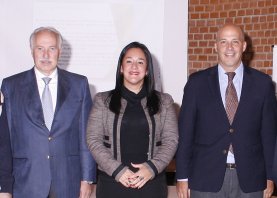 The topic of discussion was “Intellectual Property in the Social Networks” addressed by Juan Ortiz, Fabrizio Modica and moderated by Raquel Toñánez. The impact of social networks on copyright and trademarks was analyzed, case studies were presented and interesting questions for discussion were raised. There was a significant participation of members of both associations, as well as lawyers in general.  Executive Committee of ASIPI was represented by Matías Noetinger, while APAPU was represented by its President, Hugo Mersán.