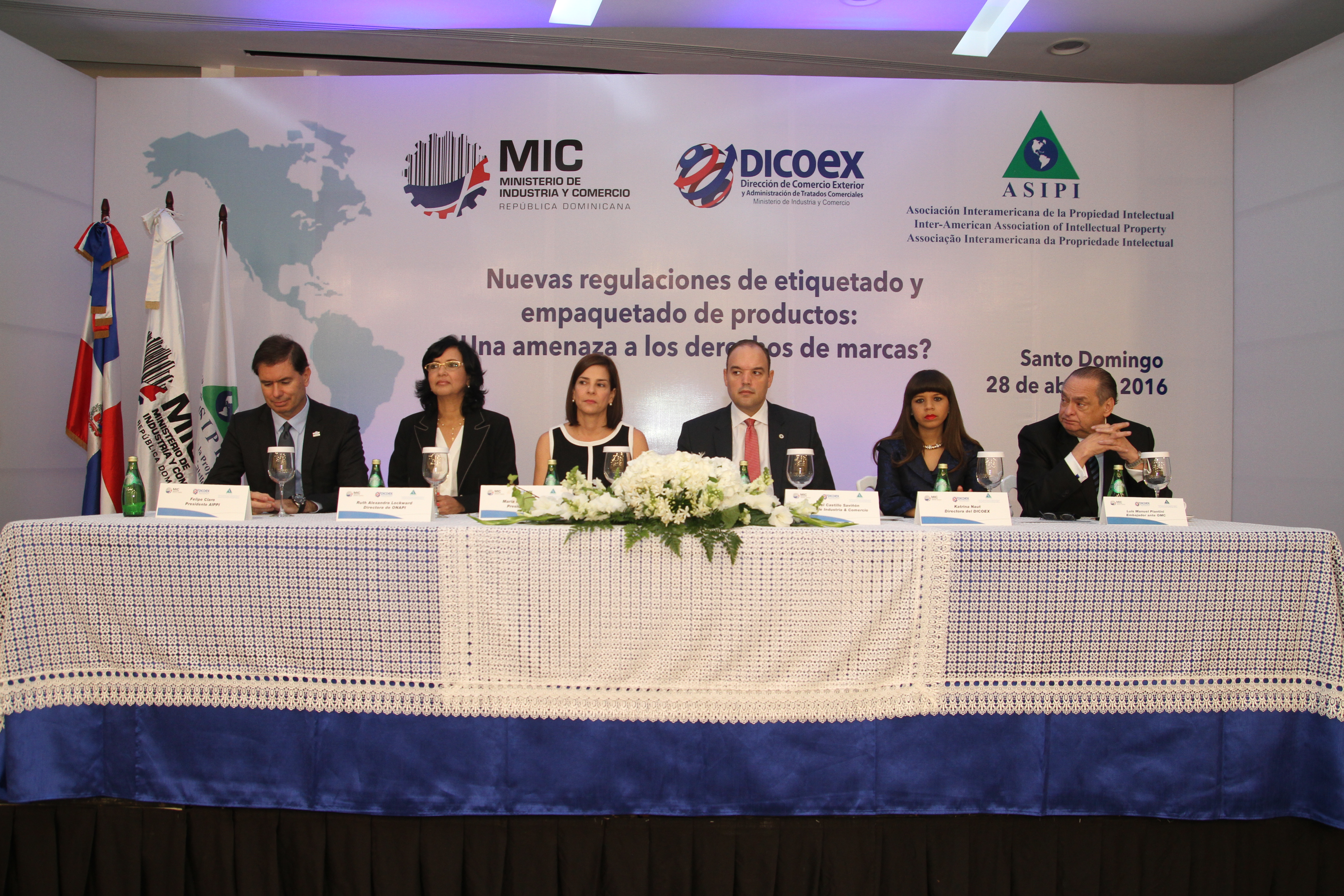 The Inter-American Association of Intellectual Property (ASIPI), together with the Direction of Foreign Trade and Administration of Trade Treaties (DICOEX) of the Ministry of Industry and Commerce of the Dominican Republic, held on April 28th, an International Seminar covering the issues of the new regulations for labeling and packaging in consumer products, against trademark law.

The formal opening ceremony began with the welcoming remarks of Mr. José Del Castillo Saviñón, Minister of Industry and Commerce of the Dominican Republic. Then Maria del Pilar Troncoso, President of ASIPI, mentioned in her opening remarks that the Seminar focused on raising questions and controversies about how recent regulations for labeling and packaging, can negatively impact the role of brands in the market and in the economic development of countries.

Once finished the opening ceremony, the first session began. The agenda started covering these regulations from the perspective of various industries: The Pharmaceutical Sector was approached by Hugo Carrasco, of the Mexican Association of Pharmaceutical Research Industries, A.C. (AMIIF); meanwhile, Mrs. Silvia Solar “Compañía Cervecerías Unidas, S.A.” (CCU) intervened on the Food Sector; and the session ended with the Tobacco Sector, with the participation of Manuel Cabral, President of the Dominican Association of the Cigarette Industry (ASOCIGAR). Then, the topic “Trademarks and its effects of the regulations on the market” was developed by Patrick Kilbride, from the Chamber of Commerce of the United States of America, and Luis José Diez Canseco, former President of the Court of Justice of the Andean Community.

After the lunch break, the session on “The importance of trademark rights in the commerce” was developed by Matthias Bauer of the International European Centre for Economic Policy (ECIPE) and Fernando Piérola of the World Trade Organization (WTO). Once closed this topic, started the “Implications for the Dominican Republic on plain packaging to tobacco products” panel, expounded by Katrina Naut, Director General of DICOEX, Hendrik Kelner, President of the Association of Manufacturers of Cigars (PROCIGAR) and Tyler Mace, from Philip Morris International (PMI).

During the interventions, the positive impact that trademarks have within countries was highlighted, and how they help consumers identify the origin and quality of their products. Similarly, it was mentioned the support they provide to the industry, to build a good image in the market, and to uphold the reputation of their products. All of this, contributing to a positive development in the economy of the countries.

Closing the academic program, Felipe Claro, President of the International Association for the Protection of Intellectual Property (AIPPI), Marco Antonio Palacios, member of the Executive Committee of ASIPI, and Urko Ochoa, representative of the International Trademark Association (INTA), addressed the topic “Finding the right balance between regulation of consumer goods and the Protection of IP”.

Throughout the Seminar, a calling was made to the governments, industries, legislators and practitioners of Intellectual Property, that all efforts are focused on promoting a comprehensive public policy, which places commerce, intellectual property, and public health in a related path.

The event was attended by 150 participants, mostly belonging to industrial sectors with great interest in the central topic of the event, who enriched the sessions with their interventions.

Once duly completed the academic agenda of the event, the President Maria del Pilar Troncoso thanked everyone for their attendance at the Seminar, and invited them to enjoy a Closing Cocktail in the Garden Deck of the Occidental Embajador Hotel. The Cocktail featured a Tobacco tasting sponsored by ASOCIGAR and a sample of Dominican rums sponsored by Barceló Export Import (BEICA).