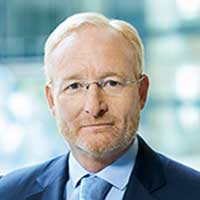 António Campinos took up office as the President of the European Patent Office (EPO), an international organisation with 38 member states, on 1 July 2018. With nearly 7000 staff, he leads one of the largest public service institutions in Europe. Prior to the appointment as President of the EPO, he was the Executive Director of the European Union Intellectual Property Office (EUIPO) 2010 until June 2018. Mr Campinos came to the EUIPO from the Portuguese National Institute of Industrial Property (INPI) where he held different executive roles. He joined the INPI in 2000 as Trademark Director and in 2005 was elected its President.

As Portuguese national with a Master in Public Law and advanced European studies, he began his career in 1998 in the public administration sector in Portugal at the Ministry of Economy and Innovation as Assistant to the Deputy Secretary of State to the Minister. Mr Campinos was awarded the title of Doctor Honoris Causa from the University of Alicante, Spain, in 2017. He was also inducted to the IP Hall of Fame of the Intellectual Asset Management magazine in recognition of his significant contribution to intellectual property law and practice.

All sessions by Antonio Campinos