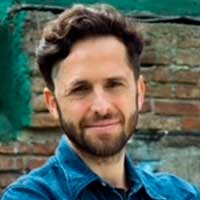 Since I have memories, I have been immersed in activities related to creation and expression.

On the one hand, I was always fascinated by painting, I studied plastic arts for many years and participated in an urban intervention group called “La Tromba” that made murals around the city of Montevideo. That was why I studied Graphic Design at the ORT University and Architecture at UDELAR (University of the Republic). Today I am a Graphic Designer and Architect.

On the other hand, I always had a leg in the world of music. I come from a family of musicians, I have studied flute, guitar, bass, I dare to play the small drum and the piano. My interest in the world of music production led me to set up my own music studio, which is my creation factory where I record my records and produce other artists.

In 1997 I formed the band Cursi with which I continue to this day. With Cursi we released seven discs and one DVD (several of them released in Argentina), I had the chance to play all over Uruguay, Argentina and Paraguay.

I have also recorded and produced many artists (Queyi, Sebastián Jantos, etc.).

In 2008 I had the honor of participating by playing, recording and producing my brother Jorge’s song “In the shadow of Ceibal” which became the Plan Ceibal anthem.

Since 2012 I have been part of the Board of Directors of Agadu (General Association of Authors of Uruguay) from where we develop a cycle of Audiovisuals of Uruguayan Authors called “Autores en Vivo”.

I am a stable bassist in Queyi and Mariana Lucía’s musical projects.

From 2013 I started playing live and composing as a soloist.

At the end of 2014 Ayuí Discos released my first solo work “again”.

Since 2015 I have started touring and playing in Argentina, Colombia, Ecuador, Costa Rica, Chile, Brazil and Paraguay.

In 2017 we released “LUDIQUE” on CD and DVD. A live album with Mariana Lucía and Queyi that achieves a nomination for the Graffiti awards for Best Long-Term Audiovisual.

In 2018 we released the EP “1978” with the Pop-Rock band “Los Travelin´Irvins” which achieved a nomination for the Graffiti awards for Best EP.

During the year 2020, I find myself presenting “The four seasons of the senses”. A concept EP of four songs inspired by each of the weather seasons. Each song premieres at the beginning of the change of season. A project conceived during the confinement of the Pandemic.

At the same time, together with Ana Prada, we present the “Primas Songs” Project, a joint show that brings together songs by both of them specially prepared for this show.

All sessions by Diego Drexler