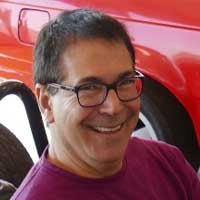 Joseph programmed his first game after teaching himself BASIC while working as a copywriter on the Coca-Cola account in the 80’s. Since then, Olin has been involved hundreds of titles and interactive products on nearly every consumer game platform launched. He’s been fortunate to serve many different development roles in game production and publishing.

Joseph divides his time between leading the videogame program at Universidad Pontificia Bolivariana in Medellín, an active game consulting practice called – It’s A Secret and as Executive Director of the Video Game Bar Association. Olin was appointed Executive Director of the VGBA; the professional association for lawyers specializing in games in 2013. Olin was elected in 2019 to be the President of the Global Game Jam Inc. the organization responsible for the largest game jam in the world that promotes learning how to code via games.

Previously, Olin served eight years as the President of the Academy of Interactive Arts & Sciences – the games industry’s largest association of accredited professionals. Olin grew Academy membership more than six-fold from 3,000 to 20,000 and rebooted the annual D.I.C.E. (Design, Innovate, Communicate, Entertain) Summit, the Interactive Achievements Awards® and the Into the Pixel™ video game art exhibit.

As a precursor to the Academy, Olin spearheaded the introduction of gaming’s most famous heroine, Lara Croft, with the launch of the blockbuster Tomb Raider franchise as vice president of sales, marketing and business development for EIDOS Interactive.  Olin also served as senior partner and group account director at Ogilvy & Mather where he launched Barbie’s foray into the digital world of web and electronic games. Olin co-created Leonardo’s Multimedia Toolbox, an educational software platform, developed with Portwood & Elliott (creators of Carmen Sandiego) for NEC of Japan.  His background also includes tenure at Philips Media, and Microprose and Hasbro Interactive.

Joseph relocated to Medellín to launch the program at Bolivariana in 2015 without a word of Spanish and is pleased that he can functionally communicate with his new language. Olin sits on the advisory boards of the digital creative conferences and speaks at a number of events annually.

Olin earned his Bachelor of Science from the University of Southern California.

All sessions by Joseph Olin