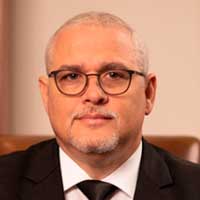 Judge of the First Chamber of the Supreme Court of Justice. Graduated in Law, Cum Laude, graduated from the Pedro Henríquez Ureña National University (UNPHU); He has an International Master’s Degree in Conflict Resolution from the Open University of Catalonia (UOC); specialty in Judicial Law at the National School of the Judiciary (ENJ), as well as several diplomas and courses in University Pedagogy, Conflict Prevention and Resolution and judicial training. He is currently pursuing a Doctorate in Law jointly developed by the Pontificia Universidad Católica Madre y Maestra (PUCMM) and the Universidad Externado de Colombia.As a teacher, he is Professor of Law at the Pontificia Universidad Católica Madre y Maestra (PUCMM) from 1996 to date, being the past Director of the Law School of this university, for the Santo Domingo Campus; and he has been Professor at the Universidad Iberoamericana (UNIBE) from 1996 to 2004; Professor in the master’s degree in Civil Procedure at the Autonomous University of Santo Domingo (UASD); and Professor of “Alternative Conflict Resolution” for aspiring Justices of the Peace at the National School of the Judiciary.In the Judiciary, he was a member of the first Council of the Judiciary, representing the Judges of the Court of Appeal from 2011 to 2016, and was also the General Coordinator of the 2016 National Judicial Summit.Author of numerous publications. In addition, he has been awarded the distinction “Outstanding Young of Dominican Republic” in 2004, awarded by Jaycee’s 72; “Honor to Merit and Legal Integrity”, awarded by the Fundación Justicia Para Todos in 2006; and winner of the contest “Teacher with all of the Law” granted by the Law Students Committee of the Pontificia Universidad Católica Madre y Maestra (CSTA) in 2013.

All sessions by Samuel Arias Arzeno

The new reality of the justice system