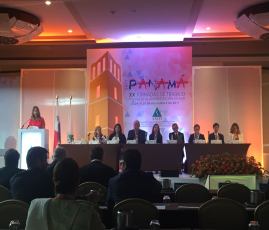 A successful start of the academic program of ASIPI Panama 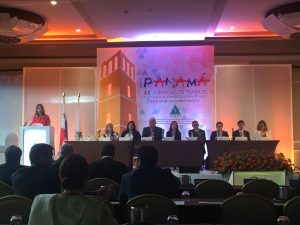 After the Ceremony, the academic debates began with the panel “How well-known is the well-known trademark in the laws and the jurisprudence?” With the participation of Ray Augusto Meloni, Director of the Direction of Distinct Signs of INDECOPI, Thomas Cuche of Duclos, Throne, Mollet -Viéville & Associés and Edanela Pérez Broce of Adidas International Marketing, BV. Karina Calderón frim Comte & Font Legalsa was in charge of moderating the times.

Immediately, the topic “Inventive Level: When the expert examination does not value the result” started, where Maria Carmen de Souza Brito, President of the Brazilian Association of Intellectual Property (ABPI) and Martín Bensadon of Marval, O’Farrell & Mairal , addressed the obstacles of expert examinations in several countries; while Carlos Olarte of OlarteMoure attended the panel with his role as moderator.

The panelists Judge Hugo Ramiro Gómez, Chief Magistrate for the Republic of Peru of the Andean Court of Justice, Juan Carlos Cuesta of Cuesta & Asociados, Debbie Roening, together with the moderator Rafael Covarrubias, Vice President 2 of ASIPI; were in charge of the topic of “Harmonization of Norms or Concentration in Trademark Registration Procesees Processes? The Andean Community Model”

During the noon recess, the Executive Committee celebrated its customary meeting with the Latin American Associations at a working lunch. In this encounter, the topics of interest for the region were followed up, and the participants discussed the progress made in the countries with their Intellectual Property offices.

Later, the new topic of “IoT – Internet of Things: What should we focus in?” started. It was developed by Ricardo Fischer of Arent Fox, LLP, Claudia Aguilar of Samsun Electronics Latin America, with the participation of Alvaro Malespin of Miranda and Miranda as the moderator.

The Education Committee of ASIPI, headed by Juan Vanrell and Karina Carmona, had the opportunity to present the four comics they developed on trademarks, patents, copyright and forgery. This is part of the material that will be used in the educational activities that will be carried out.

Finishing the hectic academic agenda of the day, the speakers Judith Fernández of ASQ Group and Mag. José E. Ayú Prado with moderator Maria Cecilia Romoleroux, successfully closed the first round of panels with the theme of “Free Zones: freedom for piracy and counterfeit? “

Late in the evening, the attendees of the Conference enjoyed a fun night at the Club Union, thanks to the Local Firms Reception offered by the offices of Panamanian lawyers who supported the event.