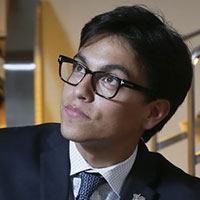 Of Colombian origin, Alejandro began his studies at the School of Hospitality and Tourism in Biarritz, France, and his first steps were taken in the kitchens of restaurants and palaces with Michelin stars, such as Mas Candille in Mougins, Monte Carlo beach in Monaco and the Hotel du Cap Eden Roc, in Cap d’Antibes, with chef Hervé Busson.

Passionate about French service, and while enjoying his experiences in the kitchen, he was presented with opportunities to participate in a Service contest. Thus, in 2009, he represented Colombia and won the World Maîtres d’Hôtel Championship in Zaragoza, Spain. This opened the doors of the Mugaritz Restaurant, in the Spanish Basque Country. Here he joins the room and sommeliers brigade, led by Head Sommelier Linda Violago, who takes him into the world of food and wine pairings.

He studied to be a sommelier at the School of Hotel Management in Nice and then joined the Hôtel du Cap Eden Roc again, but this time, as a sommelier. He moved to Paris in October 2011 to direct the dining room and food and wine pairings of David Toutain’s Agapé Substance Restaurant.

At the Senderens restaurant in Paris, he delved into the exercise of pairing food and wine with chef Jérôme Banctel.

With his old partner, David Toutain, in 2013 he opened the doors of a restaurant in Paris, where they managed to obtain a star in the Michelin guide, in its first year of operation. After this great recognition, Alejandro takes on a new challenge.

This is where Jérôme Banctel, his former chef, called him to design the Cava at the Hotel la Réserve Gabriel, in Paris, and take over the restaurant room. After a fiery and successful start, the Gabriel earned two Michelin stars in just 10 months of opening. Meanwhile, a sommelier position was ready to be liberated on Beethoven Street in Paris. Jérôme Banctel, happy with the result of the Gabriel, but also with the proposal made, encourages him towards a new challenge together with chef Pascal Barbot and chef Christophe Rohat at the Astrance restaurant, where Alejandro arrived in October 2015

As of this 2020 Alejandro acts as Chef, and as Sommelier, in the Arkhe restaurant, in Lisbon, Portugal, where he combines his activity with the wine trade (mainly organic wines) between different European countries.

All sessions by Alejandro Chavarro