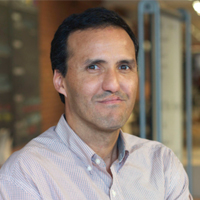 Alejandro serves as Director of Applied Analytics at Parrot Analytics based in New York . In his current role, he oversees initiatives that transform data into insights at every step of the content lifecycle. Prior to Parrot Analytics, Alejandro was at The Data Incubator, where he developed a machine learning application to predict returns on highly correlated financial assets. Previously, he co-founded TrixandTrax, a start-up that distributes original short-form videos across social media. Alejandro is also a former McKinsey consultant who went on to become an executive producer on multiple TV series in his native Venezuela over the course of  a decade. He earned his Master’s Degree in Information and Data Science from the University of California, Berkeley; his MBA in Finance and Technology from MIT Sloan School of Management; and his BSE in Civil Engineering and Economics from Duke University. He is also a current member of the International Academy of Television Arts and Sciences.

All sessions by Alejandro Rojas