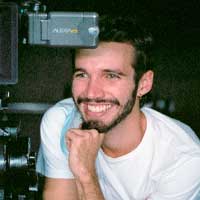 He was born in 92, in the southernmost capital of the world, Montevideo. After being a rebellious teenager, going to the French high school and drinking cheap wines, he went to travel and ended up in Mexico City, where he has lived for ten years. He studied at the National School of Cinematographic Arts (ENAC, former CUEC-UNAM) where he made his first shorts and learned from great masters -of cinema and life-. He finished his studies in 2017 and graduated as a cinematographer. Since then, the search to make films and generate powerful images has not ceased, on the contrary: it only grows. For this reason, he constantly shoots shorts, commercials and music videos. In addition, I have been lucky enough to film a couple of feature films, including: Paper boats, winner of the HBO Latino Film Festival in 2019, among others.
In general, he prefers natural light, he likes to shoot on film, and he always thinks that nothing beats a good script.