What you need to know about Costa Rica before you go!

Costa Rica is a country located in Central America and is ranked as one of the most visited international destinations. One of its main sources of income is tourism. Costa Rica is a democratic and peaceful country, and it has not had an army since 1948.

Costa Rica also offers an excellent scenario for investments and the establishment of important multinational companies, thanks to the recognized academic level of its population, as well as the high standard of modern services and its socio-political stability.

In addition, in 2018 it became a magnet for meeting tourism with the opening of the National Congress and Convention Center (CNCC), which can welcome 4,600 people to its meetings.

Located eight kilometers from the Juan Santamaría International Airport and only 10 kilometers from San José, the new space will bring together people from different origins and cultures, to exchange experiences and new businesses.

Although the country is small and it covers only 0.03 % of the planet’s surface, it proudly shelters 5% of the world’s biodiversity. Twenty six percent of the country is protected under various forms of conservation. 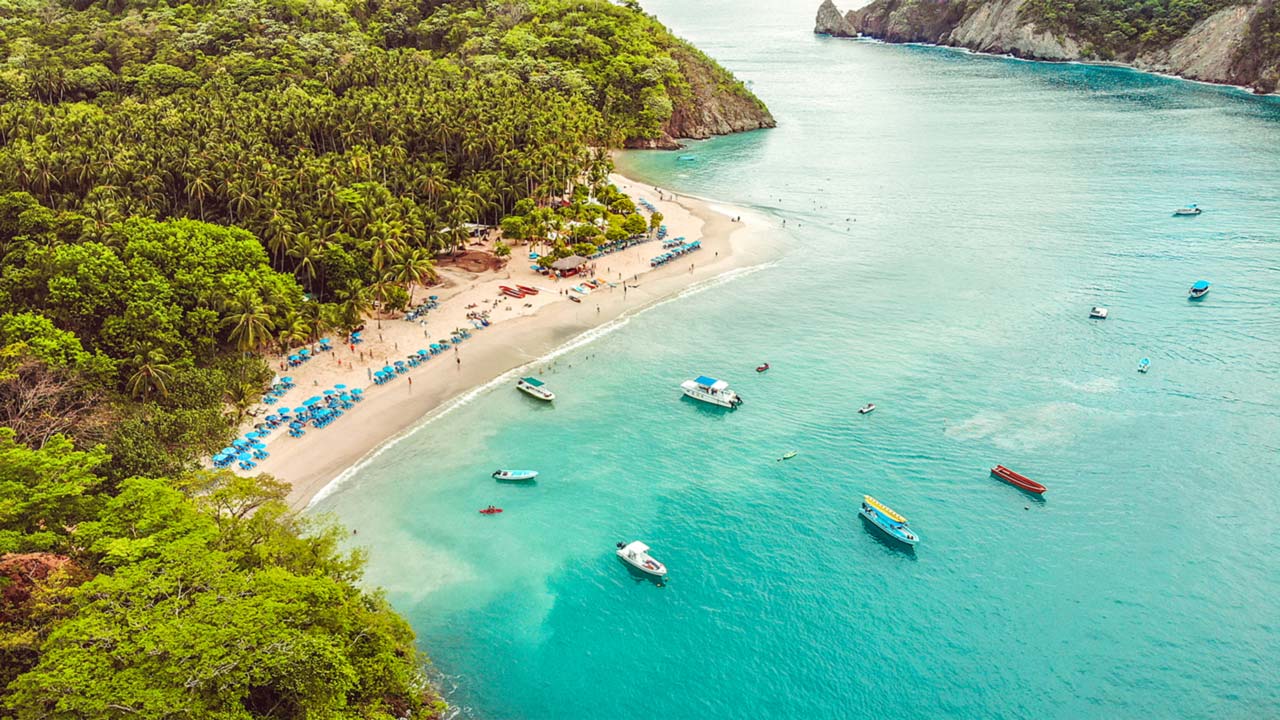 Costa Rica extends majestically from the Pacific Ocean to the Caribbean Sea with a width distance of barely 200 miles. Its land portion occupies only 20 thousand square miles.

The variations in landscape and climate from province to province are truly amazing.

Costa Rica is one of most highly valued tourist destinations on the planet. This small piece of land has all the necessary components to intrigue and continually satisfy the thousands of travelers who visit each year. Costa Rica offers unlimited tourist attractions including rainforests, volcanoes, rivers that flow through the mountains, beaches, national parks, and forest reserves.

Sustainability is not a practice in Costa Rica; it is a way of life. 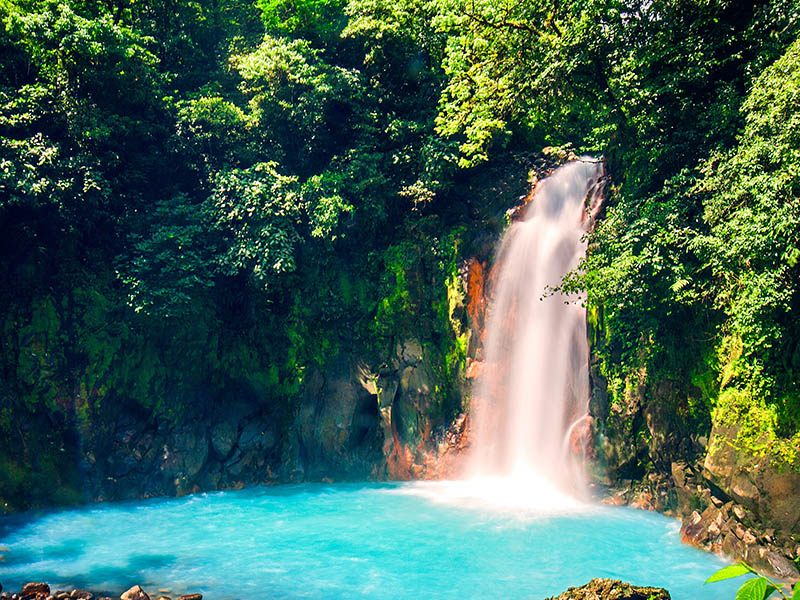 With the goal of being the first carbon neutral country in the world by 2021, sustainable practices are observed in every region of the country, in every industry, adopted by all citizens and embraced by visitors. From local Costa Rican cuisine to artisan crafts, to traditional customs and celebrations, sustainability is embedded deeply in the Costa Rican culture and traditions. 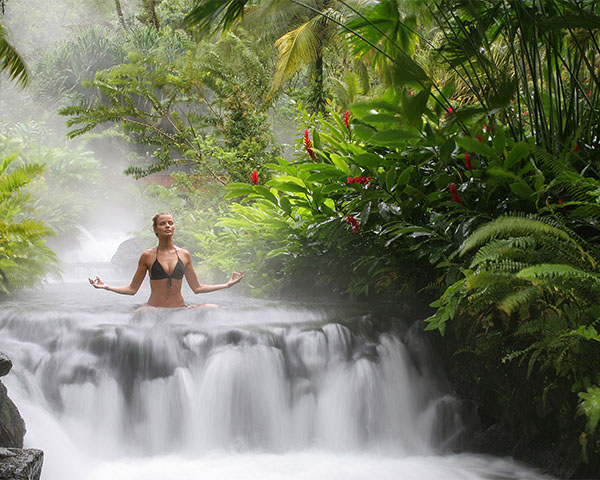 Although Costa Rica is a small territory, it makes up about 5% of the earth’s biodiversity. Fortunately, this natural treasure is protected by the National System of Conservation Areas, preserving a total of 25% of the national territory. 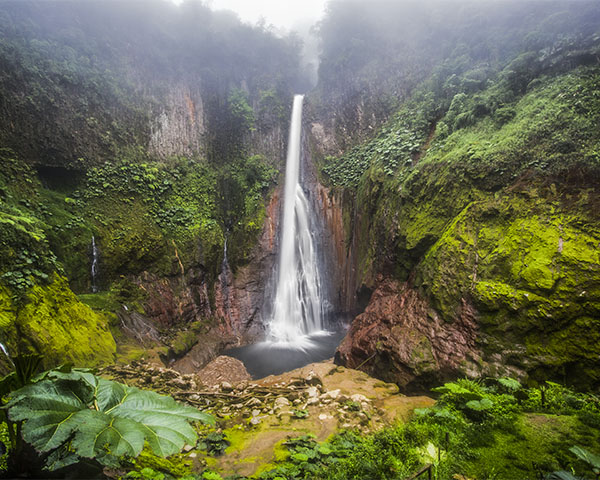 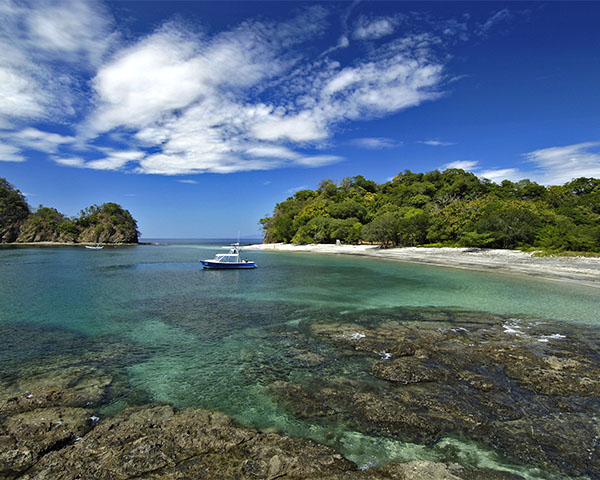 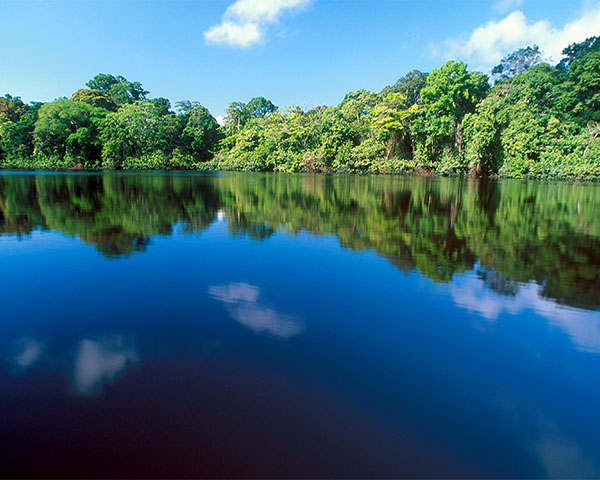 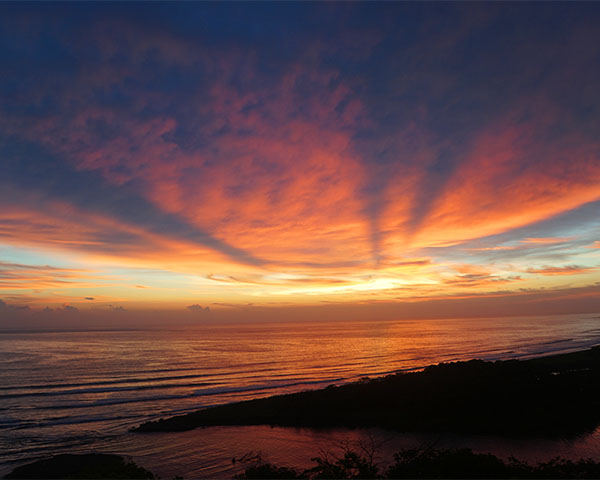 Geographically, the region between the Tropics of Cancer and Capricorn is called the “Tropical Zone”. Costa Rica is located in this region, which gives its ecological surroundings – its forests, waters, soils and climate – certain tropical characteristics. Its flora and fauna are adapted to these conditions, meaning that they are tropical as well.

This tropical climate is modified by various factors, including relief (mountains, plains, and plateaus), its position on the Central American isthmus, the influence of the oceans (winds and sea breezes and the temperature of sea currents) and the general atmospheric circulation. All this interaction of local geographic, atmospheric, and oceanic factors are the main criteria for regionalizing the country climatically.

The northwest-southeast orientation of the mountain range divides Costa Rica into two sides: the Pacific and the Caribbean. Each one of these has its own precipitation and temperature regime with spatial and temporal distribution.

Pacific: The Pacific region is characterized by a well-defined dry and rainy season. The dry season lasts from December to March. April is a transition month. The driest and hottest month is March. The Pacific region begins in the northwest and ends in the southeast, meaning that the dividing line changes from north to south.

The rainy season runs from May to October, with November being a transition month. There is a relative decrease in the amount of rain during the months of July and August, which are called veranillo, or “little summer”. These months are marked by an intensification of the trade winds. The rainiest months are September and October, mainly due to the influence of the cyclonic systems, monsoon winds from the equatorial Pacific Ocean, and the sea breezes. The rains mainly occur during the afternoon and early evening.

Caribbean: The climate regime of this side of the country does not have a well-defined dry season, since the rains remain steady between 100 and 200 mm in the driest months, which is a considerable amount.

Two relatively dry periods exist in the coastal zones. The first dry period is between February and March and the second between September and October.

The second one runs from May to August and is characterized by a maximum in July, which coincides with the “little summer” in the Pacific. The rainiest month is December, which is influenced by the effects of cold fronts coming from the Northern Hemisphere, which are present between November and May, though their greatest effect is felt between November and March. Rain falls mostly during the night and morning.

In Costa Rica, visitors will enjoy beautiful tropical beaches, exciting adventures, natural wonders, and an interesting culture – all the necessary components for an ideal vacation.

Some travelers require a visa to visit Costa Rica, so check the list of countries before you buy your ticket and verify the entry requirements according to the country where your passport was issued.

Costa Rica is a place where nature abounds and the adventure awaits, so remember:

Costa Rica is one of the countries with the best health care system, both private and public. It is recommended to have basic vaccinations for hepatitis A and B, as well as rabies and tetanus, before your arrival in the country.

The government of Costa Rica requires the yellow fever vaccine certificate when traveling from countries in Africa (Angola, Benin, Burkina Faso, Cameroon, Democratic Republic of the Congo, Gabon, Gambia, Guinea, Liberia, Nigeria, Sierra Leone, Sudan), Venezuela, Colombia, Peru, Ecuador, Brazil, and the Republic of Guyana. The vaccine must be administered at least 10 days before the date of your trip.

The Colón is Costa Rica`s currency.

US$ dollars and major credit cards are widely accepted.

ATMs are located throughout the country. Some of them remain closed from 11:00 p.m. to 5:00 a.m. Remember not to show your cash.

Sales tax or Value Added Tax (VAT) is 13%. It is included in the final price of every service or product purchase.

Departure tax should be included in most airline tickets. For those flight tickets where it is duly stipulated that departure tax is not included, you must pay $29 per person, either in dollars, Colones (local currency), credit or debit card.

Costa Rica is a year-round destination! Go get a tan, go surfing and walk on the beach, but don’t leave your belongings unattended.

Ask locals or surfers about sea conditions and rip currents.

If someone is in danger, and you haven’t been trained in first aid, seek for help.

An unlocked cell phone will work in Costa Rica. But remember to call your phone provider before you go to add global roaming services to your plan.

You can also buy a prepaid SIM card and use your unlocked cell phone in Costa Rica. Find SIM cards at the Kolbi (the national telecommunications company) stores at the airport, or at any phone company store such as Claro and Movistar. A local line is not required to dial 9-1-1 in case of emergency.

Always take care of all your belongings and valuables, even when traveling by bus.

Carry your backpack in front of you.

Check your map and cell phone in safe areas.

Outlets are 110 V, with standard US two prong plugs.

Head to a soda (a small local restaurant) or the local market for the freshest and most authentic cuisine.

Restaurants, sodas, cafes, bistros, and bakeries are easy to find. The cuisine is quite extensive and includes both national and international options.

In restaurants and hotels, a 13% Value Added Tax and a 10% tip are included in the final price; however, if you are more than satisfied with the service and wish to leave a tip, it will be welcome.

Include in your luggage all the medicines you may need if you have a medical condition, as some medicines in Costa Rica require a certified prescription.

Do not give your debit or credit card information over the phone.

Use the hotel’s safe-deposit box.

When you go on a tour near your hotel, bring a copy of your passport.

Ask the front desk for the safest routes and means of transportation, especially at night.

Many Costa Ricans speak English quite well, but remember that the native language is Spanish.