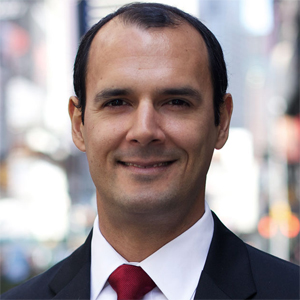 Partner of the international firm Ladas & Parry LLP, based in New York, which he joined in 2008 after having worked in the intellectual property area for several years in the Zacarías & Fernández law firm in Asunción, Paraguay. Sebastián obtained the title of Lawyer from the Faculty of Law of the National University of Asunción, Paraguay, in 2005, where he also obtained the title of Notary Public in 2006. Subsequently, he obtained the title of Master in Law (LL. M.) by the University of Michigan Law School in Ann Arbor, Michigan, in 2008 and was admitted to practice law in New York State in 2009, where he is also admitted as a Notary Public.Sebastian works in the area of ​​trademarks, copyrights and domain names, advising national and international clients of the most varied industries in the creation and adoption of strategies for the registration, protection and exploitation of intellectual property assets both in the States United as in the rest of the world, as well as in the drafting and negotiation of contracts with global scope related to intellectual property rights.

All sessions by Sebastián Lovera