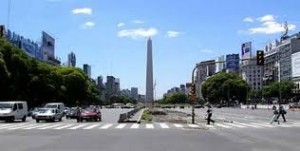 Buenos Aires has a mild weather all year round. With an average annual temperature of 18 ° C (64 ° F), there are only few days of extremely hot and cold weather.

The coldest month is July. Although frosts are rare, it is necessary to go out with a wool coat, a jacket or an overcoat and scarf. In winter, cold is moderate during the day but at night the temperature drops considerably. In summer the heat is humid. Mornings are warm, while around midday and early afternoon temperatures rise significantly. At night, the heat decreases slightly, so fresh and light clothing is used and there is no need for coats.

The rainiest seasons are fall and spring (from March to June and from September to December). They are mild or brief rains that do not prevent the development of various activities and allow walking down the street with an umbrella or raincoat.

On sunny days of autumn and spring, mornings are cool, the temperature rises pleasantly towards noon and descends at night.

– Veranito of San Juan. Around June 24 (date of birth of St. John the Baptist), in winter, the temperature can reach 24 ° C (75 ° F). The phenomenon extends between 3 to 7 days. It is common to see people sunbathing in city squares, as if spring had arrived.

– Storm of Santa Rosa. Showers and thunderstorms that come with the arrival of spring, at the end of the cold season. It happens before August 30, feast of Santa Rosa.

– Snow in Buenos Aires. Buenos Aires’ history records only two snowfalls: the first was in the night of June 22, 1918 and the second during the holiday of July 9, 2007.