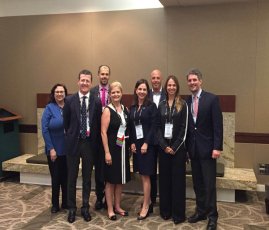 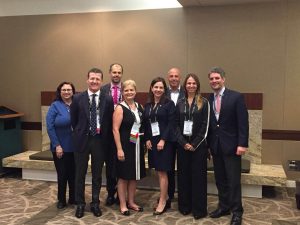 The Inter-American Association of Intellectual Property (ASIPI), was present at the 140th Annual Meeting of the International Trademark Association (INTA) held from 19th to 23rd May in Seattle, WA, United States.

Prior to the official opening of the Conference, ASIPI held its annual Cocktail in honor of its membership, at the Hyatt Olive 8 Hotel located in Seattle. The event was closed with invitation, in order to provide a space for networking and fraternity to all the ASIPI members who participated in the INTA Annual Conference.

Following the formal opening of the event, the Association maintained an active participation as an exhibitor of the commercial exhibition. The ASIPI Stand was open to the public from May 20th to 23rd, receiving an approximate of 500 visitors from all the countries represented at the Conference. The attendees showed great interest in the initiatives developed by ASIPI, as well as in its next event, the XX Congress to be held by the end of the year in Rio de Janeiro, Brazil.

On this occasion, the Executive Committee decided to hold a raffle of a courtesy registration to the ASIPI’s Congress, which was held as a way of thanking the support of those who visited the Stand. Once finalized the commercial exhibition, Maria del Pilar Troncoso, Elisabeth Siemsen, Luis Henriquez and Matias Noetinger, President, Vice President 1, Secretary and Vocal 3 of ASIPI, conducted the raffle having Mrs. Georgina Pianta, from the Pianta & Associates study Buenos Aires, Argentina, as the winner.

Within the framework of the 140th Conference, ASIPI had a busy agenda of high profile meetings with other institutions. Maria del Pilar Troncoso, Luis Henriquez, and Marco Palacios, President, Secretary and Vocal 2 of ASIPI, together with Antonio Tavira and Christian Duran, representatives of ASIPI in the Intellectual Property Office of the European Union (EUIPO), participated in the bilateral meeting with said office, represented by its authorities Mr. José Izquierdo and Mrs. Sharon Blackburn. The same was held in order to discuss the participation of the Association in the activities of this office, as well as to delimit the next projects in conjunct.

Likewise, the usual meeting of ASIPI and INTA with the Latin American Associations was held. Maria del Pilar Troncoso, Rafael Covarrubias and Luis Henriquez from ASIPI, along with Etienne Sanz and José Luis Londoño from INTA, received the representatives of these Associations. The successful dissemination of the Impact of Brands study in Latin America was discussed, and some initiatives to work together in the coming periods were analyzed.

On the other hand, ASIPI was represented by Rafael Covarrubias, Vice President 2, at the meeting of Non-Governmental Associations (NGO) organized by the International Association for the Protection of Intellectual Property (AIPPI). Concomitantly, Maria del Pilar Troncoso, Elisabeth Siemsen, Luis Henriquez and Matías Noetinger participated in the bilateral meeting ASIPI-INTA, with Tish Berard and Etienne Sanz, President and CEO of this association. This meeting served to strengthen the bonds of collaboration between both entities, and for the renewal of the Memorandum of Understanding signed initially in 2015. This document formalizes the already existing and close friendship between ASIPI and INTA.

Undoubtedly, the busy agenda of the Association in the framework of the Annual Conference of INTA, shows the important participation of ASIPI in the local and international field on Intellectual Property. Likewise, these meetings demonstrate the close collaboration of ASIPI with its sister entities, which also serve as opportunities to strengthen ties and initiate projects together.