The Inter-American Association of Intellectual Property (ASIPI) is committed to contributing to the path towards a green future.

Did you know that the ballpoint pen was invented by the Argentine Ladislao José Biro; the diamond scalpel by the Venezuelan Humberto Fernández Moran; the liquid fuel propulsion engine by the Peruvian Pedro Paulet, the color TV by the Mexican Guillermo González Camarena; contraceptive pills by the Mexican Luis Miramontes … and thus many other Latin Americans have achieved inventions that have had a significant impact on the world … Despite having the intellectual capacity to compete in the world of inventions, a much lower percentage of applications of international patents that are filed annually, come from Latin America.

What do we do to reverse these numbers? It is essential that governments, associations, universities and unions, among others, work together to educate, creating programs that invite innovation and entrepreneurship.

With ASIPI VERDE our Association aims to support various initiatives related to intellectual property, especially aimed at the conservation and sustainability of the environment, mitigation of climate change and social well-being.

We conduct webinars and activities designed to show how developed technologies and Intellectual Property regimes function as exclusive rights to protect developments that will eventually achieve a green future.

Under ASIPI VERDE we have the “Green Patent Contest”. Within the framework of the XVIII “National Competition of Industrial Inventions and Designs” that INDECOPI (the Office of Intellectual Property of Peru) conducts annually, ASIPI organized the first contest to recognize the inventor who presented the best project to improve the environment. The winner was Hernán Asto Cabezas, with the project: “Device generating electrical energy from bacterial species and solar panels with a cooling system.”

Likewise, we are not longer printing the material of our events with the commitment to eliminate all paper and to the -extent possible- use products that are biodegradable and have low impact on the environment.

It is important to join efforts to preserve our ecosystem and mitigate all those actions that erode it, thus motivating an awareness and working together towards a better world. 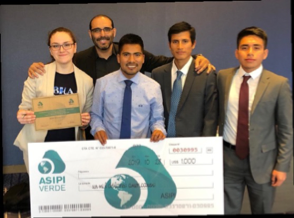